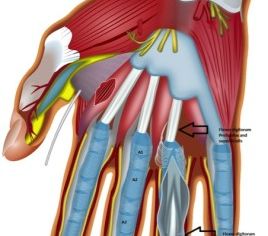 Protect your Pulleys with Matt Bulman

Rock climbers put unique strain on their bodies, particularly the fingers.  In fact there are few sports that demand quite as much from these tiny appendages as rock climbing.

Today we’re going to look at finger injuries, particularly pulley injuries – why and how they happen, how to avoid them and what to do if you can’t.

Anatomy: the compromise of a bipedal tool user

Even though your fingers might feel like they’re getting muscly when you train, they don’t actually contain flexible muscle tissue.  When you flex and extend your fingers, you aren’t using muscles in your fingers.   The muscles originate at your elbow and run down through your forearm, morphing to ropey tendons near the wrist. These tendons pass through the carpal tunnel at your wrist and snuggle closely to the finger bones, where they are anchored by a series of five fibrous rings called annular pulleys.

Tendon is incredibly strong tissue, which attaches to bone. In your fingers, two tendons thread each other and when you contract the muscles in your forearm (for example to grip a hold) the force is passed along the tendon and into the fingers. As we hominoids evolved from tree dwelling species to bipedal tool users, our fingers became more nimble and capable of subtle movements. What we gained in mobility, we lost in stability. As such, our evolutionary advantage for tool use has become a liability for climbing.

If you’re interested in finding out more about finger anatomy, you can watch this video. 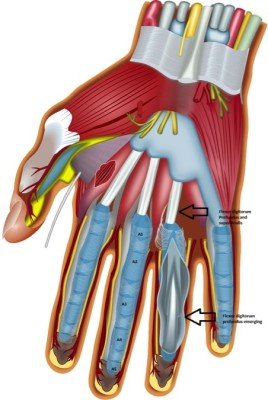 When you grip a hold, the geometry of your hand (the shape your hand takes or the way you hold a hold) determines how the load is distributed across your tendons, pulleys and bones. Ideally the load will be divided evenly across your fingers, reducing the chance of injury.

Open-handed holds with straight pathways from finger to elbow distribute the force smoothly along the kinetic chain.  When you hold a crimp, however, you make sharp right angles out of your fingers. The majority of the force ends up pivoting on one or two small pulley structures. This can lead to strain and injury of the pulleys, common in climbers and rare in other activities.

Scientific studies have shown that pulley ruptures are far more common in the crimp grip than in an open-handed grip. Scientists have measured the forces generated through the forearm and fingers, and then distributed through the pulleys with different grips. In one study, the equivalent force in the forearms demonstrated 226 Newtons on a pulley in the crimp position, but only 103 N in the open hand position*. Yep.  Less than half. The only thing that changed was the shape of the grip.

You obviously have to generate quite a lot of force to rupture a pulley. It’s not just a matter of a simple crimp. So how does it happen? Here are a couple of classic scenarios:

You’re crimping on a tiny edge when your foot slips and all your weight suddenly loads your fingers.  Or maybe you’re setting up for a dynamic move to a crimp, about to leap and throw the weight of your body onto a few fingers. At this point, up to 36 times the force normally exerted on your pulley is heaped upon it.  You might hear a pop, a sign you’ve probably ruptured a pulley or pulleys.   However, there are many other injuries which can also occur in the fingers.

Think before you crimp

The easiest way to minimise the risk of blowing a pulley is to simply avoid crimping when you climb.  Even though you might feel more secure and powerful when you crimp, studies found that the power generated by climber’s muscles are virtually the same in both the crimp and open-handed positions. But it takes practice. Give it a try.

If you’re new to climbing, spend some time climbing on bigger holds and developing your finger strength before you bear down on smaller edges.   Over time your tendons will strengthen and be more resistant to injury.

If you think you’ve done a pulley

The first thing is to take a break.  Ice and compression with tape are both a good idea, but go see a health professional.  They will take a history, examine your fingers and make their diagnosis.  While pulley injuries are common, there are many other injuries with similar symptoms.  The most reliable way of knowing for sure and assessing the extent of the damage is dynamic ultrasound.   Radiography may also be warranted to rule out fracture.

No matter how you climb, climbing places a greater load on the hands than you normally encounter in everyday life and finger injuries do happen.

To minimise your risk, use an open handed grip whenever possible and take extra care when climbing at your limit.  Make sure you rest between attempts on hard problems and train wisely.

If you think you might have injured a pulley, consult a knowledgeable health professional to get yourself back on rock as soon as possible.

In Part 2, we will discuss treatment options for pulley injuries and finger pain.

* No living humans’ tendons or pulleys were damaged in the writing of this article. Scientific experiments referred to were conducted on cadavers.

Matt Bulman is a chiropractor and rock climber with a special interest in climbing injuries.  He has treated rock climbers at local, national and international competitions; he regularly presents injury prevention workshops at local climbing gyms in Sydney, and has supported Sports Climbing Australia participants with treatment at state and National events since 2011.  You can book a consult with him at www.sportsnspine.com.au