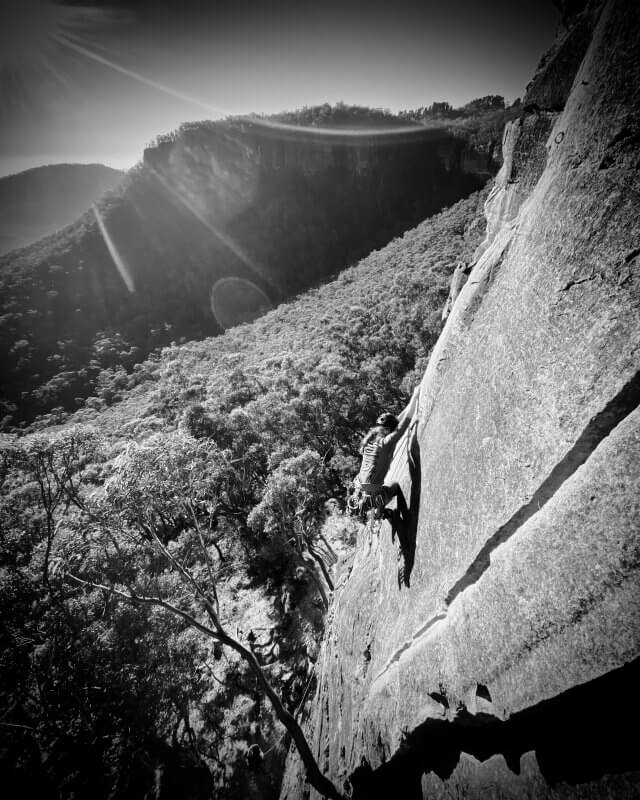 Justine hails from Ventura, California, and has travelled all over the world seeking climbing. Her international trips include Spain, New Zealand, Australia, Argentina (Patagonia), and extensive climbing throughout the U.S., including Red Rocks, Yosemite, and the New River Gorge. She discovered the Blue Mountains on one such trip, and has called it home ever since.

Justine started climbing at Uni in Colorado in 2006 and loves pushing the physical side of climbing (i.e. sport climbing) but also enjoys pretty much every form of climbing. She learned to lead trad in Joshua Tree in 2010 before becoming a Climbing and Mountain Biking Guide in the New River Gorge (West Virginia) in 2013.

She holds an AMGA (American Mountain Guide Association) Single Pitch Instructor Certification, as well as an Australian Certificate 4 in Multi-Pitch and Single Pitch terrain. She also has a Cross Country Ski Guide Cert, several Mountain Biking Qualifications, and Wilderness First Aid. In addition to Guiding, Justine has been working as an Outdoor Education Instructor since 2010 and especially loves working with kids. If she could be one inanimate object, it would be a cupcake with edible glitter.